Robert Tomlinson is the frontman at Tomlinson's, their family have been growing rhubarb since the late 1800's and the way they grow has stayed the same way since!

At one point in time, the Rhubarb triangle produced 90% of the world's Rhubarb, there are now, unfortunately, only 10 growers left. But Robert is one of them and is still going strong, how awesome is that!

The weather in Pudsey is in the shadow of the Pennines and the Rhubarb grows outside for two years before being brought into the sheds. In autumn the roots go dormant, so when the time is right the roots are brought inside. The heating is switched on and the lights are switched off to trick the Rhubarb into thinking it's spring, this is how we get our early Rhubarb crops. After 4 weeks in the sheds, it will be ready to pick!

In previous generations there were many mills in the area which gave off sulphur, the Rhubarb likes this and helps it grow. To this day there is still small amounts of sulphur on the fields. Although Rhubarb used to be a huge business, it is now on the decline and there is a huge following for Rhubarb making it a highly sought after product. Pre-war there was a Rhubarb express going to London from the area with thousands of boxes a day!

Although the 2018 heatwave caused massive issues for growers like Robert in the UK. He is doing all he can to ensure the Rhubarb crop doesn't dwindle. To do this he splits the roots, some are brought inside to produce the crop for the year and the rest is replanted for two years time. These roots are from the same strain of rhubarb as the original crop in the 1800’s - Amazing!

The yield of Rhubarb is down 1500-2000 boxes due to this issue, and with the huge demand for Rhubarb in the retail world it's important to make sure you get it while you can! 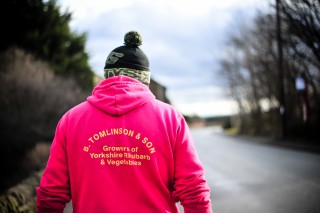 Boxed up & Ready to Go