What's All This About Then ???

Have you ever sat there dreaming about food ???

Wondering where things come from? Who looks after it all? Who was the first person to ever taste a celery stick? There are so many questions!!!

Every week in this cheeky section we will capture inspirational facts around one variety of food and release all for your eyes.

Each week more interesting facts will arrive keeping your minds active and food inspired coupled with video - What more could you need ???

Whats This Week Then ??? 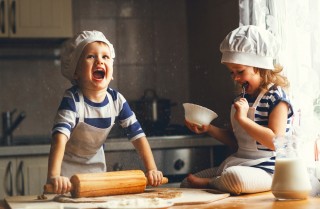 Ever wanted to know how to make FRESH DOUGHNUTS???

Take a seat and find out how...

Let's see how easy it is to send your cells into a cryptic overdrive as they try and untangle these fantastic facts around something which we use as a commodity every day of lives.

Here we go are you ready for this, this could quite possibly give you a headache.

Apple Pie was a complete mistake!! The first apple pie was created in the early 1300’s here in the UK. Back in the day, they didn’t have nice shiny tins, so they made a mixture of lard, flour, salt & water and used the tight pastry for a shell which they baked the apple inside.

The salty crust was unedible and went into the bin revealing the sweet and piping hot apple compote.

The apple from the Garden of Eden is not the only noted presence of an apple in mythology. It has a unique significance in Greek mythology and Norse mythology as well. As mentioned in Iliad Goddess Eris, the goddess of chaos (sounds like our kind of person) used a golden blushed apple to start the ball rolling for the Trojan war.

If you have ever looked at an apple and had a shiver run down your spine ???? you may be suffering from Malusdomesticaphobia. This is a phobia of apples or a fear of the texture that resides inside that tight skin !!!!

Apples hold a little secret not known by many, but the actual seeds/pips which sit there waiting to grow into new trees given are laced with Cyanide.

This poisonous substance is easy to digest it can get a bit tricky if you manage to chew over 200 apple seeds in one go - so make sure you spit them out!!!!

Order Your Apples at MyDelifresh