In 1878, the Jersey Royal was discovered. Before this, a selection of potatoes had been grown on the island, Hugh de la Haye spotted two huge potatoes and bought these, he then showed his friends when they decided to cut it into 16 pieces and plant on a cotil. The following spring this produced a large and early crop which gave kidney shaped potatoes… This is how the Jersey Royals were born. They were then developed over time.

Over half of Jersey’s total land area is in agricultural or horticultural use, so it is no surprise that agriculture is one of Jersey’s largest industries. Jersey Royal new potatoes account for the vast majority of the island’s fresh produce exports.

It has its’ own unique microclimate, soil and environment which creates the perfect conditions for these potatoes to grow. Jersey soil is light and well-drained, many farmers still use seaweed from the beaches as a natural fertiliser known as vraic. This is due to the strong tidal flows and movement of the sea, large deposits large quantities of vraic on the shore and the use of this dates back to the 12th century.

The season begins in November, where they are planted under glass. The main outdoor crop is then planted from January-April, harvesting begins at the end of March and runs through to July. The peak season for Jersey Royals is May, at this time up to 1,500 tonnes of them can be exported daily.

When the potatoes are picked from the early slopes are hand-lifted and the mechanical harvesters are used for the later, flatter fields. The fields on slopes are known as the cotils, they’re so steep that almost all of the work is done by hand.

The Royals are then checked twice by workers and quality controllers before being packed and loaded ready for export. The potatoes are harvested, graded, packed and shipped daily to ensure freshness and the highest quality.

The Jersey Royal potatoes has also got EU protection of designation of origin (PDO)! The PDO is an official recognition granted by the EU to protect the product as it’s produced in its’ country of origin, which is what helps to make them so unique. 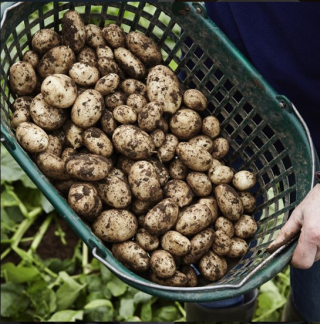 A Basket of Potatoes

Out in the Fields