Before Shepherd’s Purse came about in the late 1980’s, Judy’s husband, Nigel ran a 5th generation pig and potato farm. Judy was originally pharmaceutically trained and noticed a lot of people were dairy intolerant so Judy decided to look into the benefits and properties of sheep’s milk. She came up with the idea of creating something for them as this was not well heard of at the time.

As a result, they bought 6 sheep and Judy taught herself how to milk them and make products from the milk where Shepherd’s Purse came to life!
Judy tried making butter, cheese, milk, ice cream and cream and made friends with Les at Wensleydale, which was originally created for sheep’s milk. Judy got taken under their wing and was shown how to make cheese. Believe it or not the cheese industry is very supportive of the competition.

The cheese was initially making her cheese in the kitchen of her home, today Shepherd’s Purse is making around 1 tonne of cheese per day! The company is growing every day but is still completely handmade.

Shepherd’s Purse’s ethos is to always enter competition. Judy won her first Gold award in 1989 with Olde York at Nantwich International Cheese Show. This spiralled the growth of Shepherd’s Purse with massive demand for their cheese!

In 2017, the team received their best year as Harrogate Blue won Super Gold at the World Cheese Awards and being named in the top 15 kinds of cheese in the World! What a most awesome achievement.

All the milk for their cheeses is collected from 4-7 local farms through the night, every day. This is then processed and pasteurised daily. The cheese is produced 4 times a week and is a two-day process. Every cheese uses vegetarian rennet, making everything vegetarian friendly.

The process of cheese-making is so interesting for those who’ve never seen it! There are so many factors that are strictly controlled. From the vat, the moulding and turning process right through to the blueing rooms and fridges there are measures in place to ensure every cheese is consistent and of the right quality!

It’s great to be close to the team and all their achievements we are proud to support these most inspiring people as they grow their business alongside Delifresh with engagement and respect for each other along our journeys.

It's fantastic to witness that innovation is still a key driver within Shepherd's Purse. Anyone want to go on a visit around the diary ??? 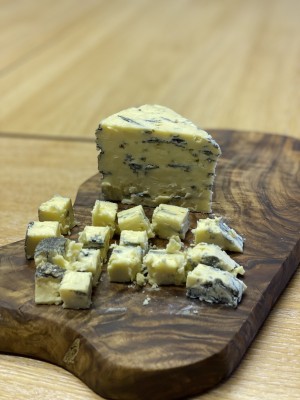 Start of the Blueing Process