Some Of The North's Finest Cheese

Yorkshire Dama Cheese is a story of inspirational bravery by a woman who refused to let her circumstances define or constrain her.

It is about finding a new place to call home and new experiences which has led to the creation of a British multi-award winning cheese and dairy company right here in the North of our magical country.

Razan came to the UK after the war in Syria back in 2012. With her husband and three young children, they had lost almost everything and had to settle into a new life in Yorkshire which as you can imagine was a massive change in lifestyle and very worrying time for their young family.

Initially, Razan began searching for a job but despite having a pharmacy degree and a scientific background her lack of references and work history in the UK made it extremely difficult, in fact pretty much impossible to secure work.

With a strong microbiological background, having graduated from the Medical Institute in Syria and a husband who is an electronics engineer their most inspiring minds came together to hatch a plan, to which they could offer their family a bright future here in the UK.

These days Syrian cheese (a squeaky semi-hard cheese) that Razan knows and ate every day for breakfast in Syria is very trendy in the UK and we all totally love it. In fact it’s moving into overdrive as its ultra-popular!!!

With an idea and a start-up loan of just £2500, they both had to adapt equipment and then finally got approval to start manufacturing cheese in June 2014. After just four months of production, they won the WORLD CHEESE AWARD Bronze Prize 2014/15, highlighting the true quality of their most amazing cheese.

How Romantic Is All Of That??? 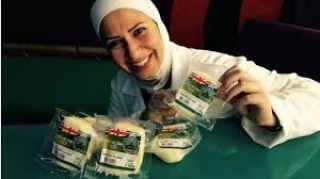